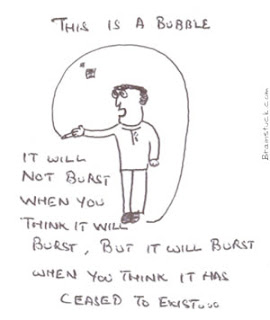 King County home prices tumbled to a new post-boom low in October, and no one is sure exactly why.

Weitz – no one can figure out why?!....hmmmm?.... Perhaps the greatest Asset Bubble in the History of America that we experienced in Real Estate is imploding? Perhaps the excessive un-employment? Perhaps the constantly rising cost of commodities because we continue to thrash the dollar via the Federal Reserve's QE programs? Perhaps the decreasing incomes for most of America? I can’t place my finger on it... Someday, we’ll figure it out.

As real-estate insiders offered a host of possible explanations for the drop Thursday, they also debated whether it's a harbinger of a new, long-term decline — or a one-time statistical blip.

The median price of houses that sold last month was $320,000, down nearly 15 percent from October 2010, according to statistics released by the Northwest Multiple Listing Service.

Weitz – 15%! That’s a large number. I’ve been writing on this for some time and don’t recall Seattle posting a YOY decline that bad.

Single-family-home prices in Snohomish County were down 13 percent, to $235,000.

Glenn Crellin, director of the Washington Center for Real Estate Research at Washington State University, said he expects prices will continue to slip for another year.

"There's little pressure on buyers to be active, especially with interest rates not expected to rise for some time," he said. Mortgage rates have been at historic lows — even dipping below 4 percent for a 30-year term — for much of this year.

Weitz – that’s an odd dichotomy - Sales are up dramatically, but prices are down dramatically. Clearly, there is a dis-connect in the market. My conclusion: the high end is not selling. Conversely, cash buyers are coming in and collecting investment properties they can immediately cash flow with.

But those gains were overshadowed by the big decline in prices. King County's single-family median sales price was off more than 33 percent last month from its July 2007 peak.
The last time it was lower: March 2005.

Some possible causes of the October drop:

"It's only natural that this would cause downward pressure on October's median price," he said.

But Ellis, who also is a researcher for online brokerage Redfin, said homes likely to be affected by the new limit account for less than 4 percent of the King County market.

Weitz - I'm with Tim. I think it played a role (and will continue to play a role), but there are much bigger issues going on here.

2) "Distressed" properties: Bank-repossessed homes tend to fetch less from buyers, as do "short sales" for less than the seller owes its lenders.

Together, they made up about 31 percent of all King County single-family-home sales in October. That's about the same share as the last few months.

Weitz - this isn't going away - it's impractical to call this an excuse for a bad year. This is the new reality.

3) Cash offers: More buyers, especially investors, are making all-cash offers, Crellin said — and buyers are accepting them, although they often are lower, to avoid the uncertainties of financing.

Sellers of higher-priced homes also are starting to drop their asking prices, he added, and that could be pushing the median sales price lower.

For instance: Ellis said that while Redfin's research also shows a big year-over-year drop in the median sales price last month, the price per square foot fell much more modestly.
That suggests "for whatever reason, people bought smaller houses," he said.

Weitz - See my comments on this below.

In higher-priced Seattle and the Eastside, price declines were in the single digits.

Weitz – If I had to make a prediction, I expect the lower tier will continue to drop, but will be the first part of the market to recover as it simply makes sense to purchase these properties that can immediately provide cash flow via renters. Conversely, it is my opinion that the high end market will be much slower to drop (as has been shown), but will nevertheless drop and it will have a difficult time finding a bottom in the foreseeable future as incomes stay stagnant and the cash flow analysis vs. renting a similar property is way off – time will tell. 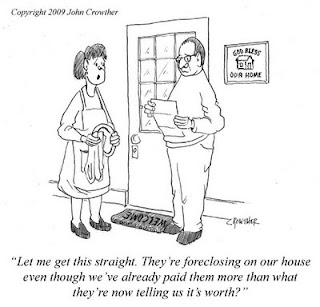 Weitz- a new agreement was announced in which servicers (Banks) have agreed to provide “thorough” reviews of the foreclosure process for millions of homeowners. As usual, I’ll provide thoughts throughout.

WASHINGTON — More than 4 million borrowers who have faced foreclosure since early 2009 will have the chance to have their cases reviewed for potential wrongdoing, federal regulators and some of the nation's largest mortgage servicers announced last week.

The reviews stem from a deal earlier this year in which 14 servicers agreed to hire independent consultants to evaluate whether borrowers suffered financial injury during the foreclosure process. If a review finds errors or abuses by the financial firms, the consultants will determine what recompense wronged homeowners deserve.

Weitz – Note that the “Independent Contractors” are hired by those that they are conducting reviews of – how’s that for a conflict of interest?! You think these “Independent” contractors will have the incentive to be harsh on those writing their checks?

On Tuesday, servicers began mailing letters to the estimated 4 million borrowers whose loans were in the process of foreclosure between Jan. 1, 2009, and Dec. 31, 2010, detailing how to request a review of an individual case.

Officials at the Office of the Comptroller of the Currency (OCC), which crafted the April servicer agreement along with the Federal Reserve, said the mailings would continue through the end of the year and be accompanied by a large-scale marketing campaign to make borrowers aware of the effort.

Additional information is available at www.IndependentForeclosureReview.com or 1-888-952-9105.

Requests for review must be received by April 30.

"There is no cost to the borrower for this review," said Joe Evers, deputy comptroller for large banks at the OCC.

Under the agreement, the servicers are required to foot the bill for the outside consultants conducting the reviews. Evers and other OCC officials said Tuesday that "a great deal of effort has been taken to ensure that the independent consultants are truly independent" and that the servicers will be prohibited from influencing the findings.

While eight consultants are working on behalf of the servicers involved, officials said they had spent months developing a common website and call center, as well as common branding and marketing materials, in an effort to make the process equitable for each eligible borrower.

Examples of financial injury might include unwarranted or miscalculated fees charged to borrowers, a foreclosure that happened while a borrower was already in bankruptcy protection, or a property that underwent a foreclosure sale even as the borrower was awaiting word on a loan modification from the servicer.

Details about how long it will take to conduct the reviews, what sort of redress homeowners stand to gain, and what rights they might have to sign away in exchange for compensation remain unresolved.

These will be thorough reviews, reviewing every aspect of the foreclosure," Evers said. He said officials hope to complete the reviews in a matter of months after the final deadline, but he acknowledged the mountain of work involved

OCC officials on Tuesday also said no decision had been made yet about what type of compensation borrowers will be entitled to if the reviews show they were the victims of errors or misrepresentations.

Weitz – another major pitfall of the program. How do you quantify an improper foreclosure? You can’t just get your house back – someone else is now the rightful owner of it. The only compensation will be monetary in nature and I’m guessing that the banks are not going to be proactive in writing large checks.

It also remains unclear whether borrowers might be required to waive their right to sue the financial firms involved in exchange for compensation.

The April deal also imposed a host of other requirements on the servicers involved, including that they provide a single point of contact for struggling borrowers, many of whom have complained of getting the runaround when they try to get help.

Weitz – Despite all my criticisms, I will still encourage clients to pursue this option if they have been foreclosed upon. Its free to apply and its certainly possible there will be some compensation involved.

For more information on your rights in foreclosure, short sale or other distressed property situations, consider contacting a Seattle Foreclosure Attorney.