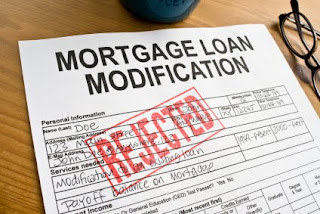 Weitz: I often have clients approach me and ask about the possibility of a principal reduction to allow them to stay in their home - my response is always the following: who actual owns your note? If its Fannie Mae or Freddie Mac, you've got a better chance of winning the lotto. As of today, there have been 0 principal reductions by these large GSEs since the crisis bagan. Below are some excerpts on the topic from a recent Seattle Times article:

Nongovernment holders of delinquent mortgages are offering more payment plans with debt forgiveness as Fannie Mae and Freddie Mac resist, according to the U.S. Office of the Comptroller of the Currency.

Principal reductions were granted in 8.5 percent of the 116,153 delinquent mortgages that received permanent modifications in the fourth quarter, according to a report by the unit of the Treasury Department.

Weitz: 8.5% - that's pathetic; unless banks and Fannie and Freddie get more aggresive with this, the foreclosure numbers will continue to mount.

That's up from 8.1 percent in the prior three-month period.

"Principal modifications can be a tool in the overall arsenal," said Bruce Krueger, a senior mortgage expert with the comptroller's office, said in a conference call.

"It just makes sense for homeowners who have been significantly underwater to take a principal writedown," he said.

Lenders have struggled to find ways to reduce losses as 12.1 percent of mortgages were delinquent or in foreclosure at the end of last year, down from 12.4 percent a year earlier, according to the comptroller's report.

About 5 million homeowners have lost their property through foreclosure or other forfeiture actions since 2006, according to RealtyTrac.

Fannie Mae and Freddie Mac, the mortgage financiers under government conservancy since 2008, haven't granted principal reductions because it would cost the taxpayer-funded companies almost $100 billion, Edward DeMarco, the acting director of the Federal Housing Finance Agency, said in a Jan. 20 letter to Congress.

Weitz - here is a perfect example of the short-sightedness of these companies. They look at the losses of doing the modifications...they SHOULD be looking at the loses they are going to incur when theses properties go to foreclosure because a modification was not executed.

The agency oversees Freddie and Fannie.

Private investors may have acquired the mortgages at a discount or been forced to write down the value of the loans to comply with U.S. banking regulations, making it easier for them to offer debt forgiveness, Krueger said.

Principal deferrals, which reduce payments by delaying rather than forgiving debt obligations, were offered on 20 percent for loans held by Freddie Mac, 26 percent by Fannie Mae, 30 percent by private investors and on 39 percent of mortgages in bank portfolios.

Delinquent loans that received payment reductions greater than 10 percent have had a lower re-default rate than plans with smaller discounts, Krueger said.

The number of permanent modifications fell 44 percent in the fourth quarter from a year earlier and 16 percent from the prior three-month period, according to the report.

Weitz - not sure how to interpret this number - are we improving in the Real Estate market or the modifications becoming less successful - I would guess a little bit of both.

At the same time, the number of homes seized through foreclosures rose 22 percent to 116,060 and the number of short sales, when lenders agree to sell for less than the debt on the property, increased 29 percent from a year earlier to 63,257.

Owners of 768,773 homes had active mortgages modified under President Obama's Making Home Affordable program as of Jan. 31, the most recent data available from the Treasury Department. That included 44,058 loans with principal modifications, with a median debt reduction of $68,063.

For more information on your rights with Foreclosure, Short Sale or Loan Modification, consider seeking the Guidance of Seattle Foreclosure Attorney.